Before any of you proceed to read this blog post, I just want to warn you in advance, that this blog post will be of a strong sexual nature, with a lot of vulgarities and perverted descriptions, so if you are sensitive or do not enjoy content, please DO NOT proceed. You have been warned ! 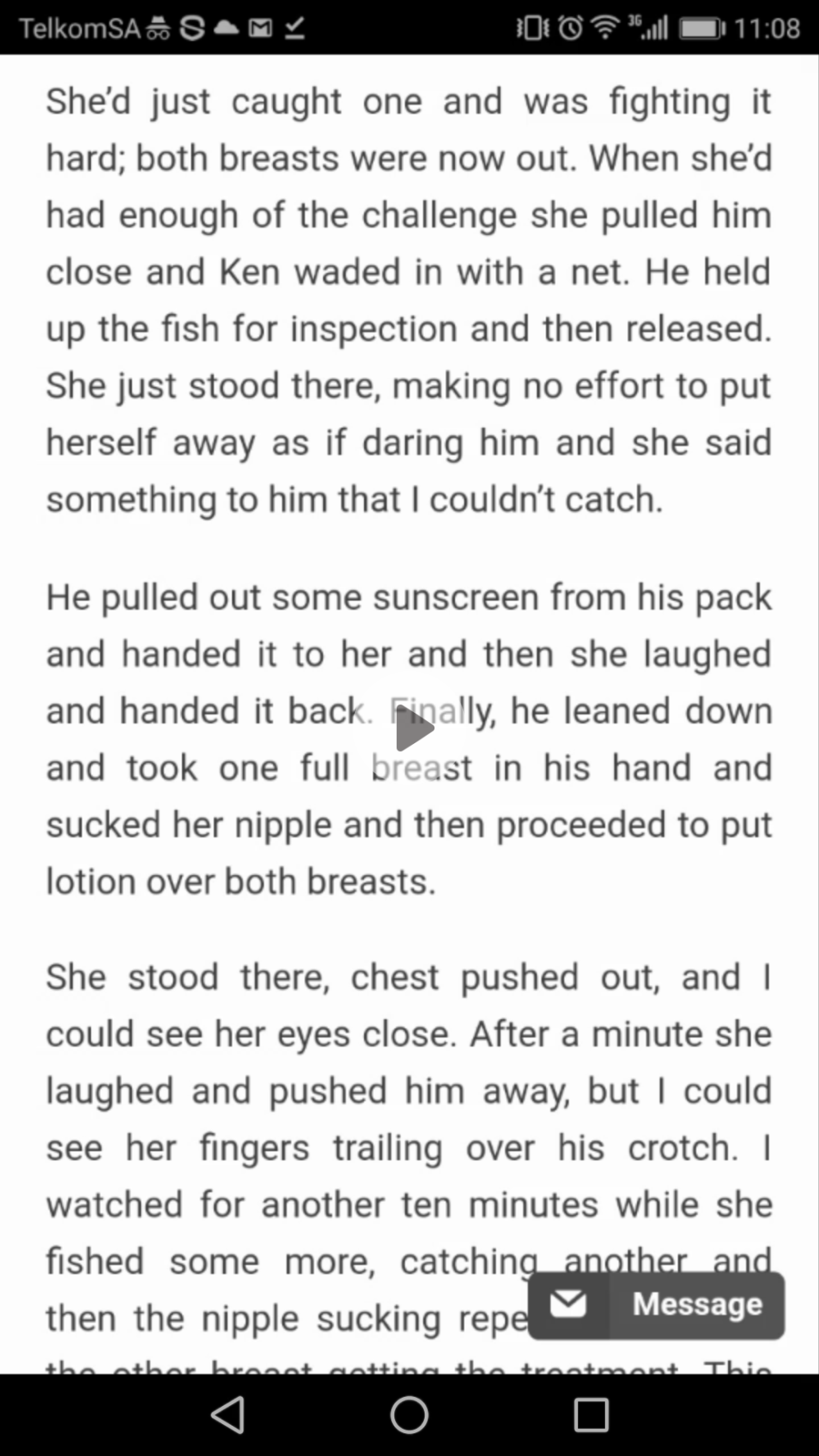 There was more, she did it with 3 guys and stuff, and I mean 3 new guys, but honestly I’m on the verge of throwing up, so I’m not even going to add it here.

What’s up Uchihas, it’s your favourite #INFJ blogger Aavi here again, bringing you the most disgusting corrupt topic I could possibly think of, so disgusting I’m not even going to go back and read this myself. The intro scenarios on it’s own is enough to make me throw up, so I’ll excuse myself as a reader from this blog, and just be done with it when I’m done typing.

There was also another story about this young attractive wife, who took a day off while her husband went of to work. She was gardening and asked two adolescents to help her move stuff. When they were done, the 2 boys ended up joking about seeing her breasts, to touching them, to videoing her, to banging her, to two timing her, for a whole 6 hours, it really makes me sick. She told her husband afterwards apparently, and he replied , “Well I told you take it easy”.

I would’ve shared the story, but I read that  a while back, but I couldn’t find it, and honestly I didn’t try very hard. You might be wondering, why did I look up and read things like that ? Am some sick psycho sexual twisted maniac ? The answer is no. Sometimes when I feel too happy and I feel like life hasn’t snatched away my happiness yet, so I feel like it’s up to me to snatch away all that happiness and replace it with mistrust and overthinking, I’m such a consistent guy. And obviously I feel the need to share this topic with you, because why Keep it to myself ?

The definition of cuckolding according to the urban dictionary online is as follows:

Damn, that’s quite lame, especially for guys. I first came across this term when I was browsing on Instagram, and it was like at 11 at night, and damn, this page comes up. You know I wish I never saw it, because it just added to my over thinking overflowing anxiety mind.

You know what’s weirder is that there are like these communities of cuckolders, they have their own like secret club that’s like a step up from wife swapping clubs. And they bring in like freshly married couples and do their best to initiate the couple. Their tactics include reassuring the man and convincing the women, with pic’s and vid’s of orgasms, orgies and other things. Some women even ended up having children with her other sexual partners, that the original husband will have to take care of, while the so called biological father or more like  “sperm donor”, keeps on plowing through. It’s so ironic, because sometimes the child is of another race, and it doesn’t seem to matter, that’s the one positive I guess.

To start of things, in the screenshot scenarios , I mean technically the wife did do it without the guy’s consent the first time and even later on. Well if that was me, I don’t know whether I’d blow my brains out or set the disgusting filthy evil ugly horrible fiend (the wife, that’s who I’m referring to) on fire. I mean I’m sure drunk prostitutes are less easier, but anyways…

The first thing I don’t understand, is how guys are okay with this ? A lot of guys before marriage are so overprotective over their girlfriends, and like no guys are allowed near her and stuff. And then suddenly after marriage, BOOM, it’s okay, because it’s for the sexual pleasure and satisfaction of your wife and the realization of your sick demented fantasies, I mean both people come out a winner right ? Your wife is over there getting her faced ploughed  into a pillow maybe by one, or two, three or even four guys if you’re even lucky. And you’re in the corner getting your so called wildest desires be fulfilled.

Is it the fact that it’s like a so called “forbidden pleasure” or a “deep dark desire”, that makes the prospect of cuckolding so alluring for guys? Because if it is, thank the Lord you don’t have my “deep dark desire”of when I’m standing on tall buildings way above the ground, to suddenly just fall of and meeting the ground. I’m not sure if it’s gravity or the law of attraction, but the ground seems to pull me towards it.  It’s even more weird because I’m not suicidal or anything like that.

We’ll get back to the guys part of things, but for now let’s focus on women and sex. From my understanding, sex is to be used for procreation from a scientific and scriptural point of view as well as the ultimate act of intimacy and proclamation of love for a person from the marriage side of things, right ? Of course it’s pleasurable, exciting freaky and fun, but it should also be with just one person right ? Of course that is, if what that’s what sex means to you. It’s no surprise that sex and the meaning of it has changed over the years. It has evolved from being just an expression of love, to being a tool, a weapon, a distraction and even spiritual in some cases (which is complete donkey shit in my humble opinion).

And it’s been an increasing awareness and desire from women to feel “satisfied” during sex. Being a wild fantasy is just one of the reasons, but not being able to “please” your women is another” seems to be another. Everyone’s perception and tolerance for pain and pleasure differs obviously, so there’s bound to be different experiences of so called “satisfaction” for everyone. I think your performance is going to be bad the first time, even as far as to go as calling it shameful, especially for those who waited for the first time to be after marriage (I hella respect you guys !!!!!!). But it’s not a cause to suddenly say, “Okay, I’m going to suddenly change my man just for sex because he can’t please me”. I think you’d rather work out, read up on sex ed, watch tons of porn, learn what your partner likes and dislikes, that kinda thing.

I mean it’s like if you live a certain lifestyle depending on your income level, you can only buy things according to what’s in your wallet and account or savings. You can’t just simply dip your hand into someone else’s pockets and take their money and simply buy whatever you need. And even if that was with consent, it wouldn’t feel right would it ? I’m not sure if I’m getting through here (Probably what “cuckolded husband says, can’t believe I made that joke), this topic is just too uncomfortable for me to think straight.

And I love how women see themselves as being so called “more important” during sex, as they’re the ones being pleasured and having “things” been stuck into them. I don’t watch porn, but I have read like sex journals and things like that, and guess what ? There’s such a  thing as pleasuring a man. But obviously men are such dumb asses, they’ll just go along with anything women say. I think it’s quite amusing that after a female gives birth, her body changes, and her body changes, it’s not the same. And for guys, it doesn’t feel the same, so they don’t ask for consent and cheat on her, of course the divorce follows and he’ll lose half of his stuff.

I mean it’s basically the same thing right. A woman wants another sexual partner because she feels that her husband can’t satisfy her in bed, so she turns to a someone else instead sometimes, an ex, a community member or a club and with consent, now and than, there’s sex with someone other than her partner. It’s to satisfy her right, because the husband wasn’t good enough. So I mean, the husband does the same thing after his wife is pregnant, he’s not satisfied and he cheats usually, because it’s without consent.

I don’t know if there women are unsatisfied because of dick size, girth, duration, or whatever it is, but there are ways to improve or around it, yes even if you apparently have a small “pee pee”. There was a an article that appeared on my snap by the one and only Mia Khalifa, I think it was an interview by Men’s Health Magazine, and she basically answered questions about sex and how to improve and stuff as well as addressing insecurities and common misconceptions, I’ll link the description below:

There are plenty of risks, losing your partner, STDs spread, your kids finding out, negative impact on your kids and of course that you’re definitely going to Hell, I may be open minded, but I am firm in beliefs, sex should be reserved between a husband and wife, and only after marriage, you may think that as harsh or old fashioned of me, but hey I guess that’s what makes me an #INFJ , and that’s why we’re less than 2% of the world’s population.

Anyways, I’m not revisiting this sick disgusting topic, if I’ve ruined your day, than I’ve done my job. Tomorrow may be about emotions or food, I haven’t decided yet, so I’ll see you soon young Uchihas, I’m of to throw up.